Politiques sur l'eau douce
Measures whether each province and territory, as well as the federal government, has a freshwater policy and/or law that is less than ten years old.

United Nations Sustainable Development Goal 6 (Clean Water and Sanitation) seeks to ensure access to safe water sources and sanitation for all, with Target 6.4 specifically emphasizing the importance of protecting freshwater by “substantially increasing water-use efficiency across all sectors and ensuring sustainable withdrawals and supply of freshwater to address water scarcity and substantially reduce the number of people suffering from water scarcity” by 2030. Moreover, the United Nations has committed to focus on water for the Water Action Decade (2018 to 2028). Its aim is to raise awareness and advance the water agenda. Many countries, including Canada, have committed to focus on water during this decade.

This impact measure serves to assess the degree to which Canadian governments have up-to-date water policies and laws. It is important that freshwater policies be kept current, as such policies set out the vision, direction and measures governments use to achieve the targets of SDG 6, the goals of the Water Action Decade and other freshwater objectives.

This version of the impact measure expands upon the previous version by considering not just whether governments have current freshwater policies but also whether they have freshwater laws that are up to date. In some cases, governments have water policies that are not current (i.e., older than 10 years) but laws that are. This expansion of what is considered in the impact measure reflects the fact that it is not just policies that determine a government’s commitment to freshwater sustainability but also the related laws it puts in place. A policy is considered current if it was set out less than 10 years ago (i.e., in 2011 or more recently). A law was considered current if it was enacted or underwent a major amendment less than 10 years ago.

Our full analysis on this impact measure can be found here.

A 2018 analysis of freshwater policies in Canada

In 2018, a group of Masters students from University of Ottawa*, together with the Forum for Leadership on Water (FLOW), analyzed the state of freshwater policies in Canada. The study developed a set of nine criteria to assess core water policy documents in provinces and territories for the presence (1) or absence (0) of key commitments and actions under these criteria.

The study was not meant to rank or determine the effectiveness of the polices, but rather to compare high-level direction, scope and commitments across jurisdictions. We recognize each policy is a product of the context and priorities at the time it was established. The nine criteria, adapted from the University of Ottawa report, are as follows (and include a statement on the importance of each criterion):

Further details of the assessment can be found here.

The results of the assessment are as follows (note, the Federal Water Policy was not assessed): 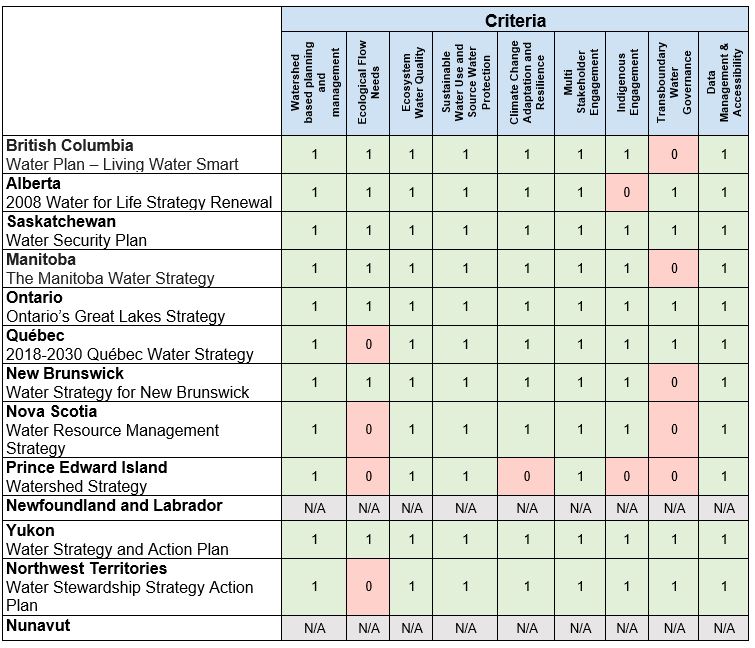 Limitations of the assessment:

5-Year target for this impact measure: We will work with OLW network to encourage all expiring or non-existent policies to be renewed/created. In five years, we hope to see at least 10 jurisdictions with a public policy on freshwater that is less than ten years old.

* Students at the University of Ottawa, Nancy Abou-Chahine, Albana Berberi, and David Van Olst, under the supervision of Dr. Mary Trudeau, prepared an assessment of freshwater policies across Canada based on a set of criteria that were later adapted for this impact measure.

Percentage of provincial/territorial jurisdictions with a freshwater policy and/or law less than 10 years old.

Provincial/territorial jurisdictions with a freshwater policy and/or law that is less than 10 years old.